I Love My Slow Cooker!

A few weeks ago I had a big, bright idea.  I thought to myself, “Self, you don’t cook much.  In fact, you never cook anything except oatmeal and boiled eggs.  You need to cook and stop eating out/ordering in so much.”  So off Sheri went to WalMart and bought a shiny, new, five quart Crock Pot.

I’ve had this butternut squash sitting my my fridge for about two weeks now, and the recipe it was intended for, but I just hadn’t gotten around to making it until today.

Don’t get me started on the joys of peeling and chopping a raw butternut squash.  I could go on for hours.

I can’t remember where exactly I found this recipe, but I thought I’d give it a try.  Please note, I am admitting that I don’t know where I found it, so whoever wrote this recipe – you deserve full credit.

Place the butter, onion, squash and orange juice in the slow cooker.  Cook on LOW for six to ten hours, or HIGH for three to four hours.  Add the cinnamon and maple syrup.  Using a potato masher, mash the ingredients.  Mix until smooth and serve warm. 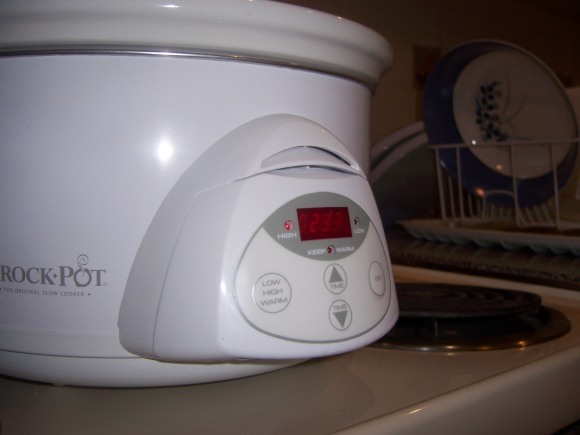 I opted to cook this recipe on HIGH for three and a half hours.  I came home, and voila!  It was cooked.  I finished the seasoning as per the recipe, and started eating!

The orange juice, cinnamon and maple syrup give this casserole a very tangy zip.  If I were to make this again, I think I would opt for one cup of orange juice, as opposed to one and a half.

Where would I rate this recipe on a scale of one to ten?  Probably a four or five.  It’s not bad, but not the best I’ve tasted (at least the way mine turned out).

Here’s another shot of the results after being mashed in the stoneware bowl it was cooked in.  I know, I know – presentation is everything, and you could have put it in a nicer bowl.  You’re absolutely right.  But…I didn’t, so get over it, lol ;-).