Way back two Septembers ago, I had purchased an Aviator Harness for Keeleigh. Things were a bit nuts at that point and I just didn’t have the time or the energy to train her.

Today I decided to take a crack at it. I watched the enclosed DVD about getting the bird accustomed to it before trying to get it on. Keeleigh is pretty tame and so I figured it wouldn’t take her too much time to get used to it.

First I draped it around my neck while holding her and giving her scritches. She immediately took it off me and walked off with it in her mouth to play with it. After a few minutes, I continued patting her and draped it across her back. No reaction. So five minutes later, I easily put it over her head and got her into it. The challenging part was tightening the harness around her “waist”, but since she’s used to me picking her up and holding her different ways, I was able to get it tightened. I took her outside for a walk around the block. To show her appreciation she pooped on my shoulder. How adorable.

Getting it off wasn’t difficult at all. I hope she lets me put it on her again so easily next time.

Newman was born December 24,2012 and I brought him home March 10, 2013. He’s a Maximilian Pionus, and oh, is he a smart one! I want to eventually be able to get a harness on him as well, and so with this baby, I think it’s going to take me a bit more time.

I started today with his black harness draped around my neck; it was the first thing he went for. He started playing with it right away, which is a good sign. At least he’s not scared of it. I’ll take it slow with this one, I don’t want him getting freaked out by it early in the game. I really want to be able to take him outside with it on. 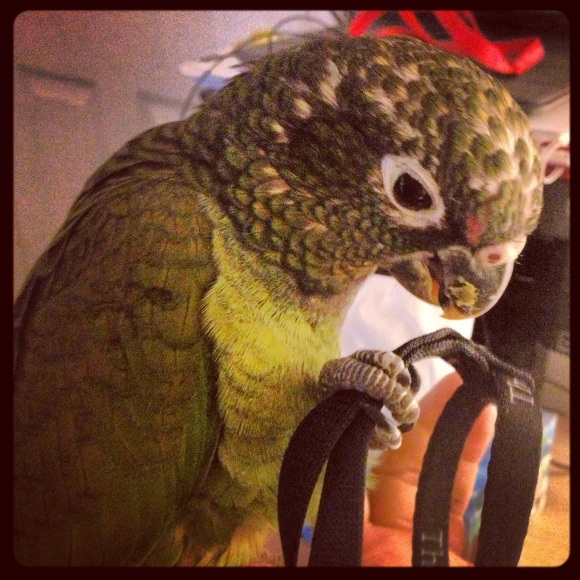 One thought on “Training Day”